Through out the past few years there has been a crisis in trust in the Global Financial system. One of the main causes has been the global financial crisis since 2008. At the same time there has been a growth in interest in alternative currencies, which are not backed by the government but by other institutions. The majorities are usually local to a geographical reason, such as the Bristol Pound, and Liberty Dollar.

One of the digital currencies has gain prominence and a large market valuation recently is Bitcoin which has recently seen market caitalizations as high as $2614956613.67025 through online trading.

Bitcoin started in 2008 when a paper was anonymous published on the foundations and theory, which would underpin the currency. It outlined the foundations of the currency based on cryptographic principals, which is decentralized. This can be broken down into two systems:

Due to it initially being a geek lead community with a hardware, sense of a new economic movement, and compotation to main the coins has, lead to leader boards and forums based soul on the rigs and hardware specs, ranking them on the power consumption, processing power, and hashing rate. These boards included normal home PCs which had been specked out for gaming, to specially designed systems which featured arrays of GPUs.

As mentioned before due to the reducing number of bit coin per block, and the increasing difficulty, meaning that the number of hashes required to break one block increase, yielding a lower return. Thus the amount of processing power required to mine a coin will increase. But processing power is not a infinite recourse and is limited by cost to run the riggs, thus to make it a profitable endeavor the market valuation of a bitcoin must exceed the value of the rig and energy used to mine the coin. It has been estimated that $15000 a day is spent on energy just to mine bit coins, this would mean at a current valuation of $106 usd/btc there would have to be atleast 1415 bit coins mined a day to make it profitable. Today 166 block where brocken in the last 24hrs, releasing a sum total of 4150 coins, thus still making it a profitable activity.

However the equilibrium point will drive individuals to mine them more efficiently using less power as the number of bitcoins per block reduces, and the number of hashes per block increases  this is where custom made hardware is used as they require less power than GPUs and CPUs. However due to the nature of the community and the drive to gain them there have been a number of reports innovative ways of mining them, these include reports in 2010 or large institutional super computers / clusters being hacked into to be used to mine coins leaving no trail of the perpetrator, and recently a system exploiting a security hole in Skype allowing software to be installed using all spare capacity of the computers CPU to mine coins.

Some of the recent demand for the currency is from the looming and on going finical crisis in the western world, recently in the freezing of bank deposits in Cyprus. This is mainly due to people seeing bitcoin as free from government control, thus any currency they have within bitcoin can no be frozen by any country. However there are issues with the currency not being backed by governments or banks, thus giving it relatively limited liquidity. Also with the massive increase in value of bit coins means that even though this is seen as good, in reality the bitcoin economy has been going though a massive devaluation, thus instead of people spending the currency for which it was designed people start to horde the currency as they see it as an investment mechanism instead of a transactions mechanism. Thus the horning of the coins is reducing the supply, which in turn is increasing the market value.

However there is skepticism about the system from many people, even though it is gaining attention it is still a very niche currency which even though has been increasing in value recently has in the past been very volatile recently dropping over 50% of its market capital. Volitlility in the past has come from companies vanishing which have stored users bit coins, and when there has been a floods of coins onto the market and recently issues with the mxGox the largest bit coin training site having a large number of DoS attacks.

One of the main issues which I believe will effect the value of the currency is once they get to a level of scarcity where the community which compete to mine them will vanish; thus a large proportion of the community will vanish as they are using it a justification to compete in building these powerful mining machines, thus when there is no point in mining causing them to move onto a new justification for these machines. Thus there will be a decrease in demand for the coins, forcing down the valuation, basically making them workless, however if level of moneyness’ has reached a level which can sustain the currency then the valuation my not be relevant as much any more.

An interesting correlation has been shown between the valuation of coins and the number of searches for ‘bitcoins’, thus once people are board with it … it could die. 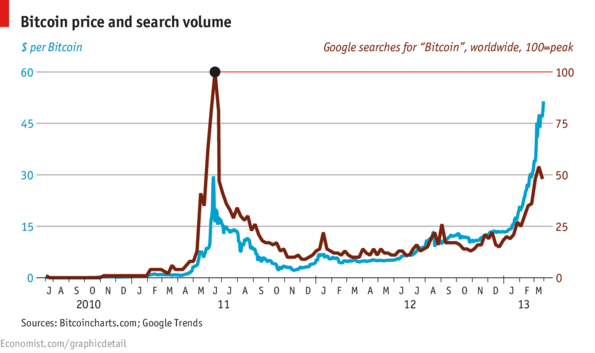